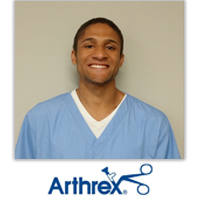 Tell me a little about your background.

Before attending medical sales college I graduated from Oregon Tech with a bachelor in biology/health sciences. While in school I also worked as a chiropractic assistant. While at Oregon Tech I also was on scholarship to play basketball.

Why were you interested in pursuing medical sales as a career?

I was interested in medical sales because it is a profession that requires constant learning. The industry is always changing and evolving and I really enjoy the idea of going to work every day with something new to learn and see. I also love the challenges of this industry and the rewards that come from overcoming those challenges.

I have a mentor who did not go to MSC but knew about the program. He recommended that I attend the program to get the needed experience to land a job in this industry.

What ultimately made you decide to attend?

Knowing that my chances of landing a job in this field would greatly increase by attending this program.

It was a lot of fun. There were a lot of things that were challenging like the Dr-Rep role plays and the in-services. Those were things that I had to get used to. But I also enjoyed gaining product knowledge and learning specific surgical techniques.

Why should someone attend Medical Sales College?

I think they should attend if they are serious about breaking into this industry. I would tell them to attend to get the needed experience and knowledge to land an interview. I feel like Scott’s week of teaching would be huge for anyone interviewing for a position in this industry.

How long did you try to get into the industry before attending MSC? What was that experience like?

I had never tried until after attending the program.

I connected with two reps in that area on LinkedIn and just chatted with them about their job and what they did. They eventually let me know that there was going to be an opening with them later on in the year and wanted me to apply. I did and got a phone interview with the territory manager. After that I did an interview on the hirevue app. That was a very weird experience because I wasn’t talking to anyone in front of me (it was a video recording of myself). After that I then had a face to face interview with the territory manager. Then I was moved on to the final step where I had a ride along and a face to face interview with the president and vice president of the company.

I wish I knew how important networking is in this industry. I feel like if I had not done that I wouldn’t have gotten the job I did.

How to interview and how to prepare for them. I think that everything that we went over with Scott in the last week was extremely helpful. I feel like what he had to say and offer was huge to my success in the interview process.

By submitting this form, I understand and agree that Medical Sales College may contact me via email, text, telephone, and prerecorded message regarding furthering my education and that calls may be generated using automated technology. You may opt-out at any time. Please view our privacy policy or contact us for more details.