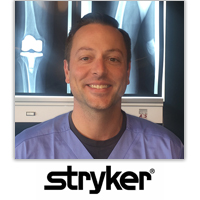 I am originally from Minneapolis, MN where I completed a bachelor’s of science degree in business administration in 2013. I relocated to Southern California in 2015 where I was working for a product development company in Long Beach before attending Medical Sales College. I was selling engineering and design services primarily for the development of medical devices and scientific instruments.

My Dad has worked as a Fleet Manager for a Zimmer Biomet distributor in Minneapolis for the last 15+ years. I’ve had many great conversations with him over the years about the orthopedic industry and have asked him a lot of questions about what he feels it would take to become a successful territory manager in orthopedics. While my Dad never worked in sales, his perceptions caused me to become very intrigued about the industry in general, and I would do a lot of research on different companies, products, and procedures based on the many conversations I had with him.

I had been aware of Medical Sales College for a few years from previous research that I had done. When the right timing finally presented itself, I felt confident that completing the program would give me the edge I had been missing.

Did you have any fears about attending the School? What were they?

Yes, it is a substantial investment of time and money. It’s difficult to make that decision without any guarantee of placement after graduation.

Upon additional research, I took note of the numerous MSC graduates who were being successfully placed in medical device sales roles with very reputable companies. I definitely gave it a lot of careful thought and consideration, but in the end, I felt that the potential long-term reward far outweighed the short-term risk.

I attended the 6 week Orthopedic Reconstruction and Trauma class in Lone Tree, Colorado. I learned more in 6 weeks than I could have previously imagined was possible. I made great friends and business contacts establishing relationships with people that I will gladly keep in touch with for years to come.

I completed a 10+ step interview process with Stryker throughout about a two month time frame. I also completed a handful of other phone interviews and face to face interviews with other companies during that time. With Stryker, I had one phone interview, which led to six additional face to face meetings with the Regional Manager, General Manager, and multiple top Southern California Stryker Sales Representatives. Then, I had to successfully pass the Gallup Poll phone assessment, and then successfully pass a drug screen and background check. Other companies may expedite this process a bit, but Stryker is incredibly diligent and thorough.

What from your training did you specifically use during the interview process that ultimately helped you land your position?

I did a ton of research on the history of and products / procedures of Stryker and their primary competitors. i.e… DePuySynthes (QuintilesIMS), Zimmer Biomet, Wright Medical, Smith and Nephew, etc. I passionately explained how I wanted to be a part of a company that is trending in the right direction. I pointed out that Stryker joined the Fortune 500 list in the early 2000’s at #492 with just over $3 billion dollars in annual revenue. I went on to explain that Stryker reported well over $11 billion dollars in revenue in 2016 and was listed at #242 on the Fortune 500. “I want to be part of a winning team that’s trending in that direction!” “It clearly speaks to the people at the helm making smart decisions in terms of innovation and strategy.”

The two constant common denominators are passion and confidence. You have to want to learn something new every day about your field. Not because you have to, but because you want to because you love it!

The training was excellent; however, for me the big draw was their ability to get your resume / profile in front of hundreds of recruiters / hiring managers so quickly. MSC has already established many of the relationships for you and they are trusted and respected in the industry.

I know now that I wouldn’t have known enough then. You have to be passionate, but you also have to come armed with a wealth of knowledge.